Synthmaster, multi-instrumentalist, recording artist, and industry pro Chris Stack met with Arturia to chat about his journey as a musician.

His passion for the synthesizer and work with Bob Moog, and how he uses MatrixBrute in his creative setup. Hailing from a small town in Western Pennsylvania, the editor of experimentalsynth.com recalls his first steps into the world of music performance: the ubiquitous piano lesson.

We always had a piano in our house. When I was in the 2nd grade I took piano lessons in a Catholic school convent. That didn’t last very long but I continued to explore on my own. Around the 5th grade I started exploring guitar as well. For the rest of my life, as I would learn something on one instrument I would see what I could apply from it to other instruments I play. A few years back I counted, and if you stretch the definition of musical instrument, I had about 80 instruments in my apartment. I blame an early exposure to Mike Oldfield’s “Tubular Bells”.

Stack’s vast instrument collection includes everything from synthesizers and guitars to percussion instruments, flutes and bells.

He also owns many exotic instruments, like ouds and rebabas - middle-eastern lutes and bowed instruments - as well as Japanese and bamboo flutes. His passion for synths stems from an elementary school music class in the Atlanta suburbs, when the teacher played the class an album of classical music, but with a twist.

We all groaned when she told us it was classical music, but as she talked more about it I was intrigued. It was called “Switched-On Bach 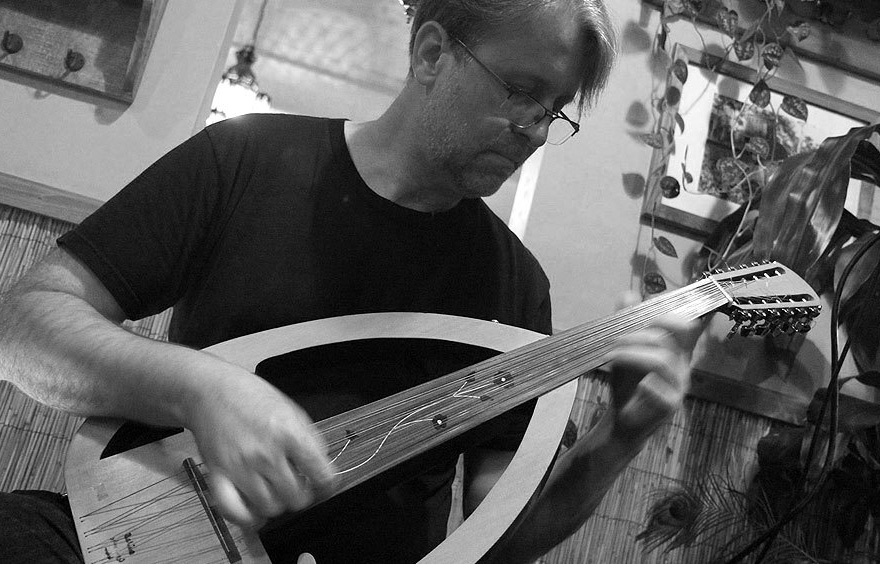 It was classical music played on a new electronic instrument called a synthesizer. There was still some groaning, but those of us who were Star Trek fans - a new TV show at the time - were paying attention.

Then the music started. Thinking back on it now, it’s hard to describe that experience. Today we can do pretty much anything we want to with sound. You want a sound that morphs between a bagpipe and a backwards bullfrog? No problem. There are new sounds in almost every pop song you hear. Not so back then. Almost every song we heard on television, the radio or our record players in those days was created from the same limited tonal palette. Not so with this album. It was relatively ancient music played on an instrument from outer space and it was made from sounds we didn’t even know could exist!

The teacher then told us about how the music was created with the Moog synthesizer. That name even sounded like it came from outer space. This was obviously the coolest thing in the world. Not long afterwards I saw Micky Dolenz playing one on The Monkees Saturday morning TV show. You could play more than just classical music on a synthesizer? 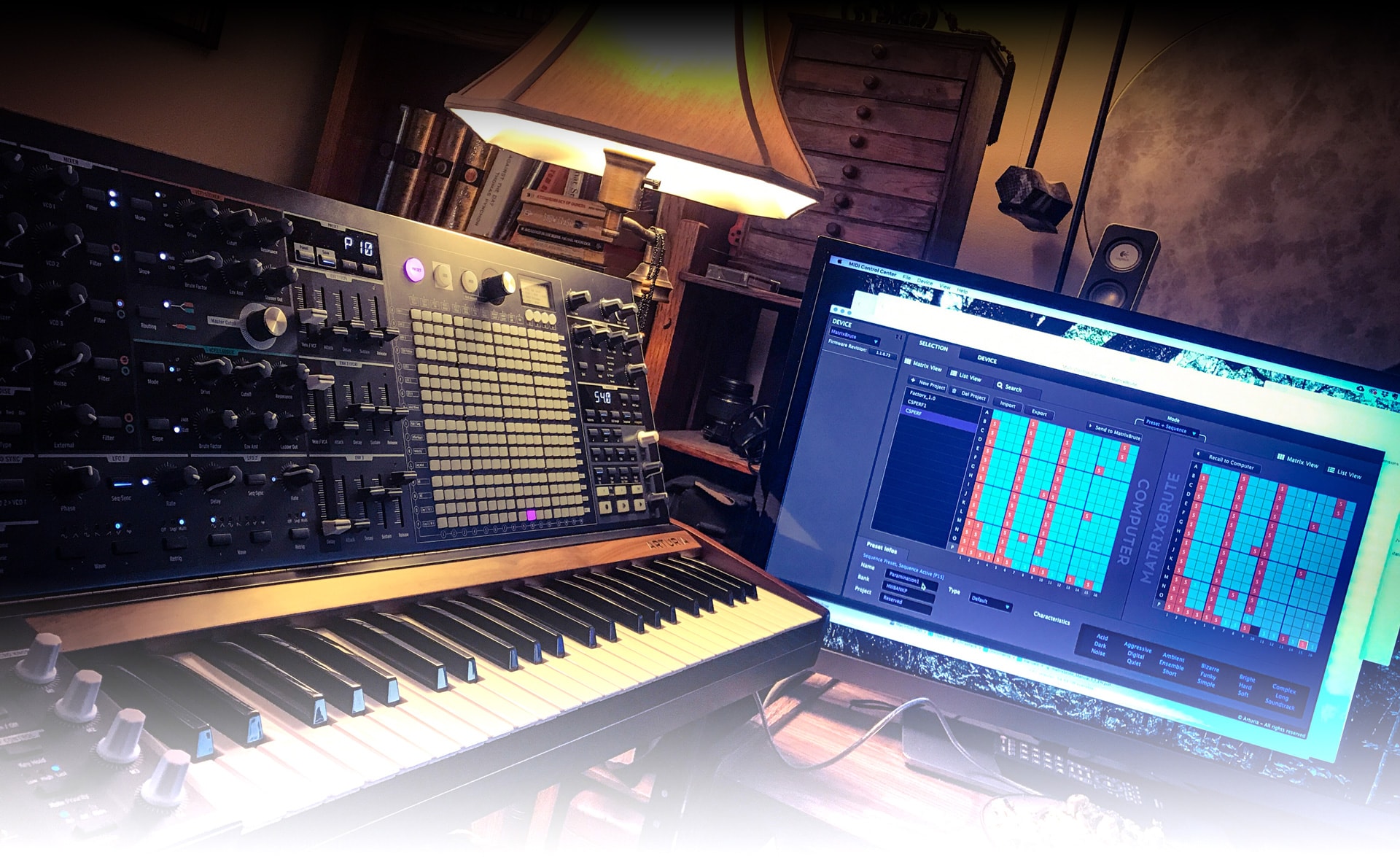 As soon as Chris was old enough to work, he started to buy synthesizers. His first synth was a KORG MicroPreset. Then a KORG 770. Then a Micromoog. Then… many, many more. By the late 80s, his passion for synthesizers and electronics had developed into a career as a printed circuit board designer in South Carolina. He noticed an article in the local newspaper that Bob Moog was hosting a public lecture at a college in Asheville, NC.

It was only about an hour away, and nothing was going to stop me from attending. I don’t clearly remember everything he talked about, but I think it was a general overview of electronic music from his unique vantage point. I remember him playing the Theremin and also demonstrating a musical concept on a non-Moog keyboard. I believe it may have been a Casio C

Z-1. There was a question and answer session at the end and I remember someone rather rudely asking him if he was behind the times because he hadn’t jumped on the digital bandwagon. Bob very graciously answered him and explained that analog and digital were both great tools for creating sound and that analog was just what he knew better.

After the lecture, Bob Moog helped clear the stage, and chatted with some of attendees. Chris worked up the nerve to introduce himself, and thanked him for his contribution to, in his own words “all that was good and holy in my universe”. He gave Bob Moog his business card, and said that if he needed a PCB designer, he would be more than happy to help.

Bob called me the next morning.

Chris assisted Moog with the design of the Multi Touch Keyboard project and the Ethervox Theremin. A few years after Bob Moog passed away, Stack became the marketing manager at Moog. 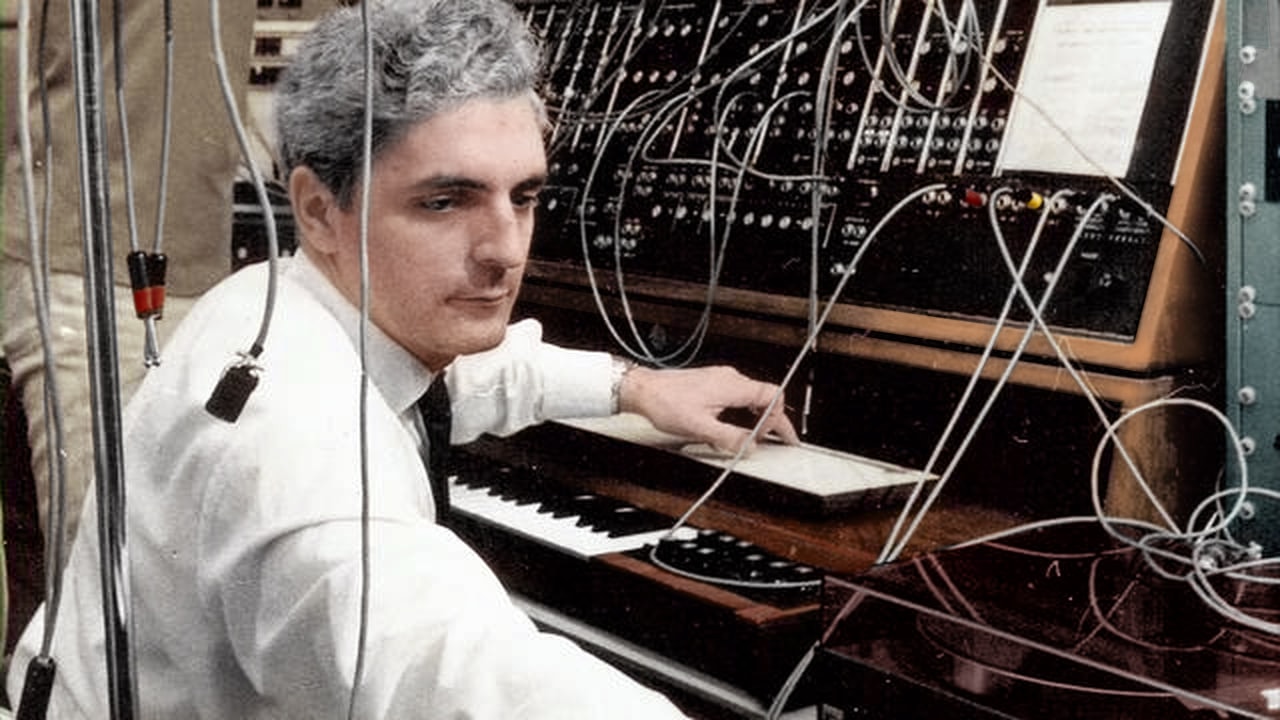 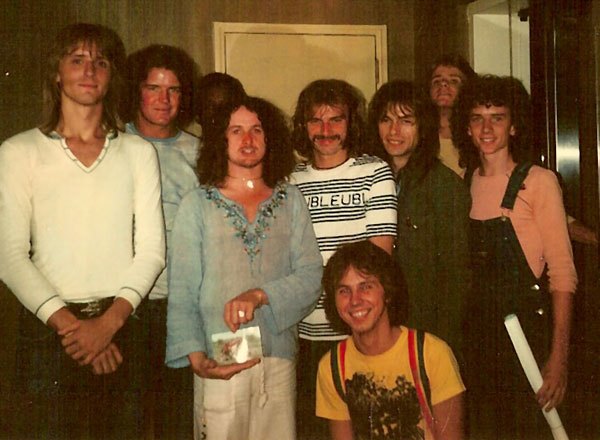 Strangely, I didn’t get the job because of my connection to Bob, but because my career had segued into marketing, and I had a rather large collection of synthesizers by then.

After Moog, I turned my marketing hand to Vo Inventions with the Vo-96 Acoustic Synthesizer Kickstarter. I’ve also worked with Koushion on their iOS step-sequencer app, SensorPoint, on the Jambé electronic percussion instrument, Kelfar Technologies on hardware and software for middle-eastern electronic music, and am one of the original organizers of ContinuuCon, the Haken Continuum conference, which is originally based in Asheville, NC, but happening this year at IRCAM in Paris.

Pioneering musician and synth expert Chris Stack has put together a selection of 16 MatrixBrute presets resulting from his irrepressible aspiration for sonic experimentation. 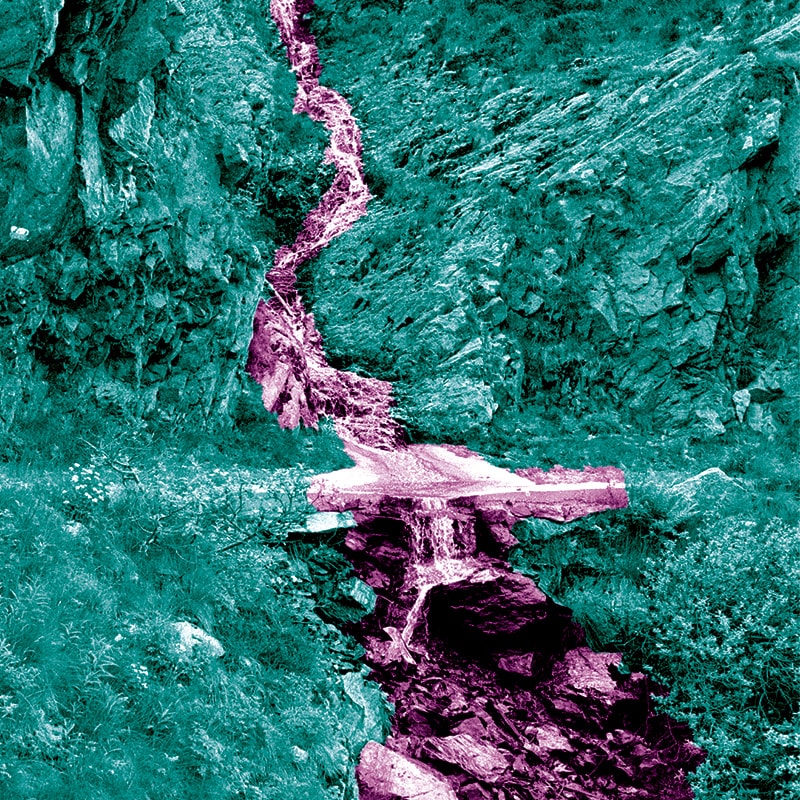 Evocative like no others and infused with a deep sense of motion, Chris Stack’s presets for MatrixBrute takes full advantage of its extensive feature set and modulation possibilities.

They will let you build limitless soundscapes, but they will also supply you with masses of inspiration to imagine your future songs and soundtracks.

A regular at industry trade shows, it was at NAMM 2016 that Chris got his first look at Arturia’s flagship analog monosynth, MatrixBrute.

To me, synthesizers, particularly many modern analog synthesizers, cry out to be used in an ecosystem with other synths and processors. When I play I almost always have multiple layers of communication happening, usually MIDI for notes and master clocking, and CV for expression and articulation. The MatrixBrute has so many connection possibilities it really works well with other gear, in a wide variety of configurations. It’s also hugely powerful! A common setup for me looks like this: 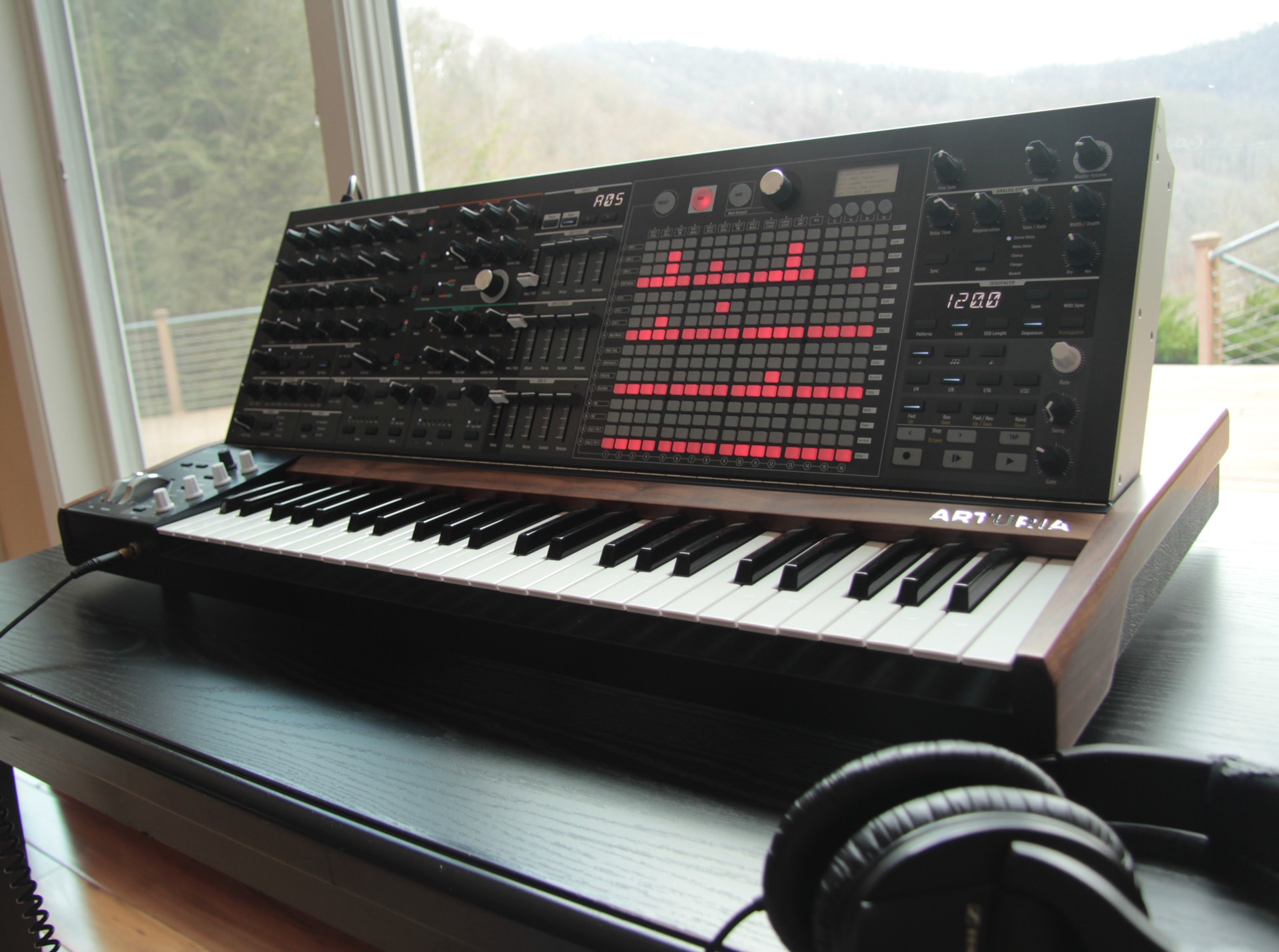 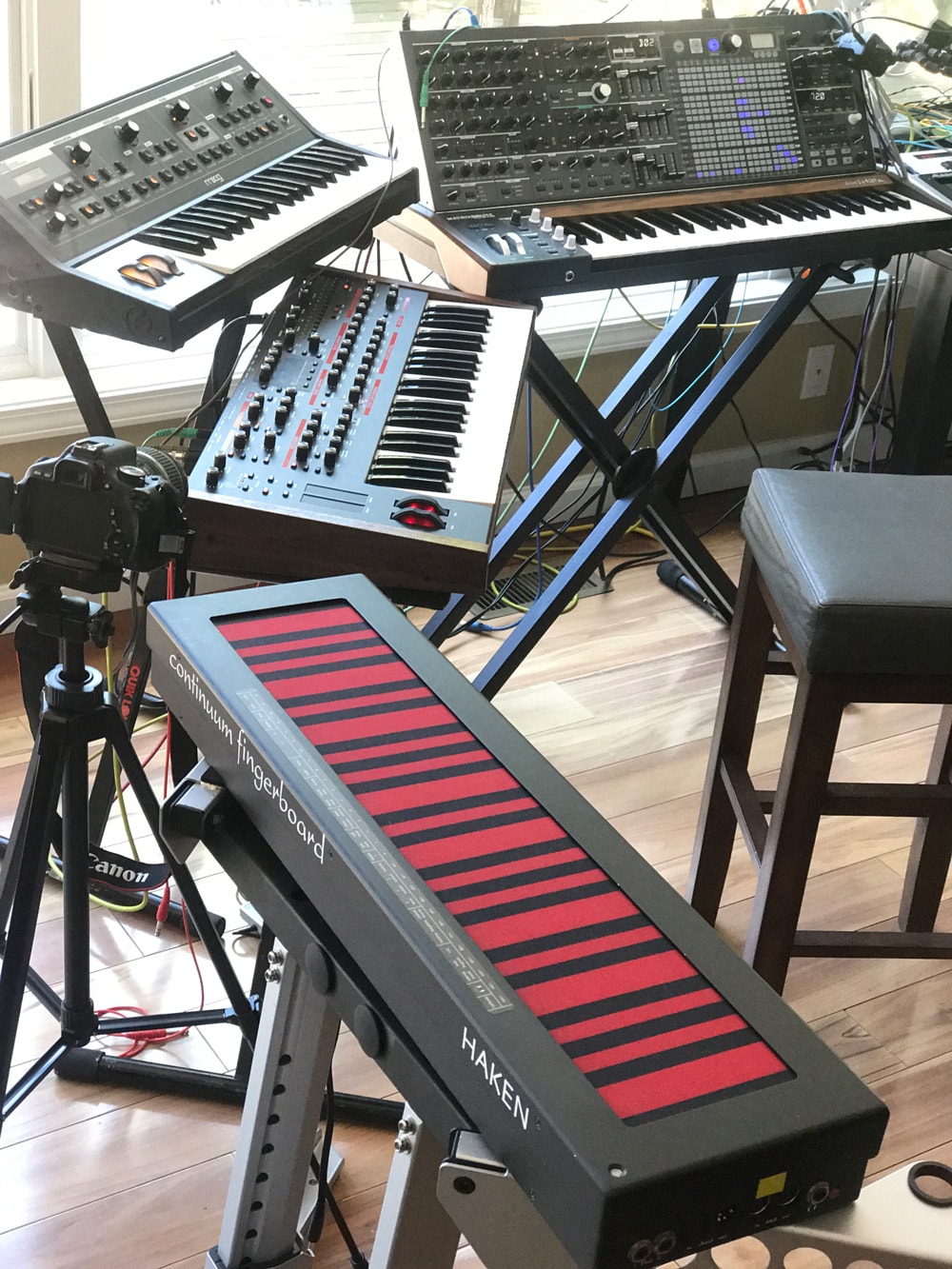 I’ll sync the sequencers on my MatrixBrute and DSI Pro 2, send the master MIDI clock to an Eventide H9 and Line 6 Echo Pro. Occasionally I’ll set each sequencer to different lengths, creating patterns that evolve. ’ll then run them or other synths through these effects, synced to the sequencers. On top of this, I’ll run a number of CV connections between the MatrixBrute and Pro 2 and/or to other synths like a MicroBrute, Moog Voyager or Little Phatty. Playing leads on the Voyager over sequenced patterns while its filter is being modulated by clock-synced CVs and it’s being processed by a clock-synced complex delay on the H9 is a joy! It’s a deep setup, and the MatrixBrute is a big part of why it works.

One of the main features of MatrixBrute that inspires Chris is its powerful filter options.

Not only does it have more than one filter, but also each filter has multiple types; not just low pass. On top of that, each filter can be modulated independently via CV, so it feels like having two synths in one machine.

The depth of sound design possibilities is staggering.

Jumping at the chance to explore the creative mind of such an experienced synth user, we asked Chris if he could share some tips or tricks he’d developed for MatrixBrute.

A lot of what you’d think of as tricks don’t really seem like tricks on the MatrixBrute because it’s all there, staring you in the face, easy and accessible. Still, there are a couple out-of-the-ordinary things I like to do… 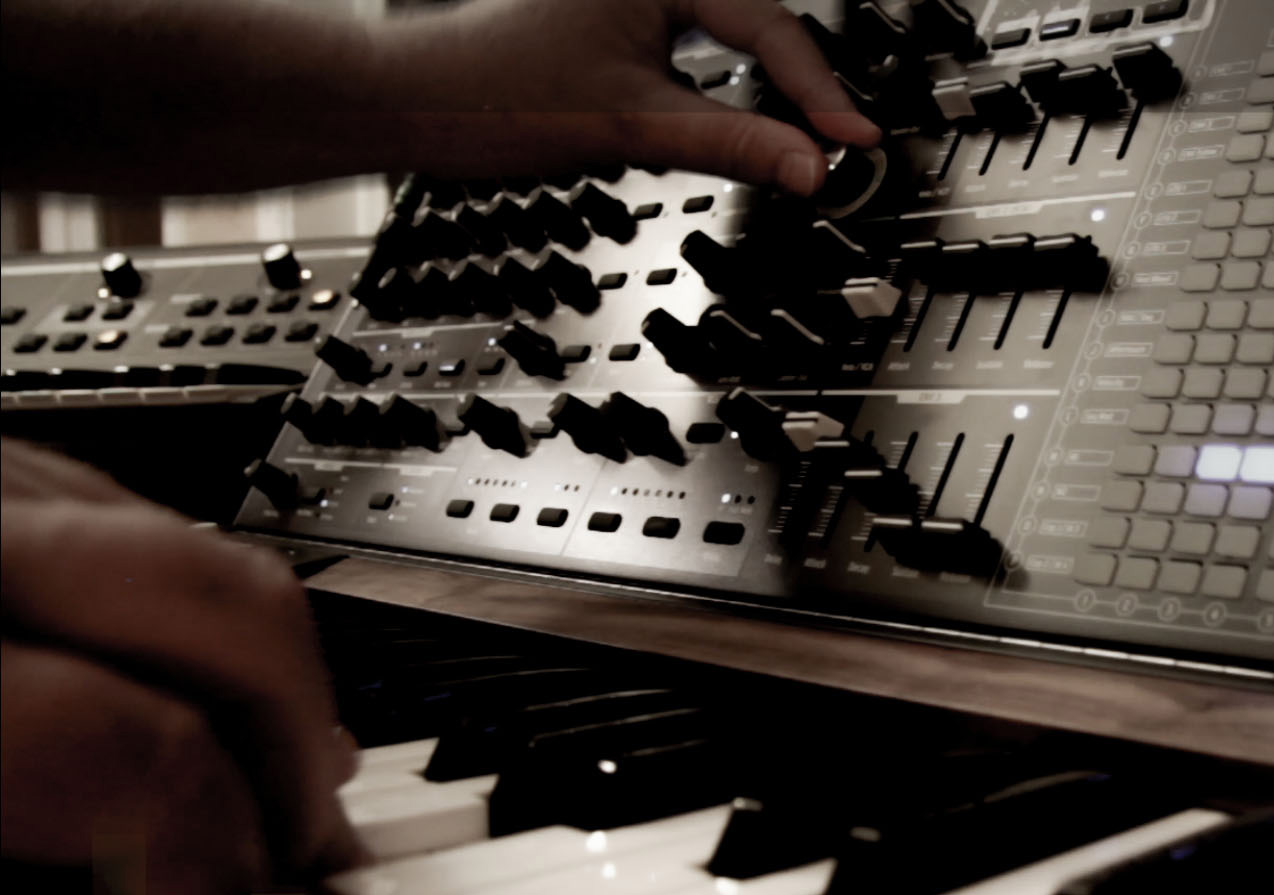 Processing other synths and modules through MatrixBrute

I like to control external synth modules like a Make Noise 0-Coast or Moog Slim Phatty from the MatrixBrute via MIDI, and run the module’s audio into the MatrixBrute’s audio input, to be processed by the filters and effects. This is basically like adding more oscillators to the MatrixBrute, and opens up other worlds of sound design. I’ll also do simpler things like just run an iPad playing field recordings into the audio input and mix that in with a sequence or paraphonic pad.

I have a vintage Electro-Harmonix rack-mount vocoder, but it doesn’t have an on-board carrier oscillator. MatrixBrute to the rescue! I use an insert cable to connect the carrier in and vocoder out. Now I just need to hook up a mic, and I’ve got a badass, incredibly flexible vocoder setup.

If you’d like to find out more about Chris Stack’s experiments with MatrixBrute and MicroBrute setups, visit his website: