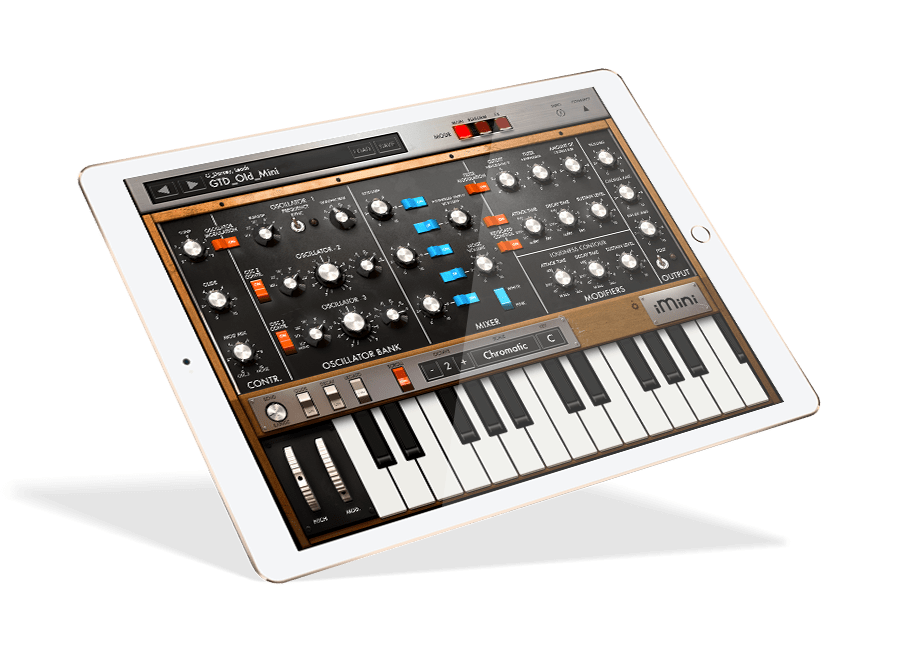 “Arturia’s iMini app is a stunning recreation of the original MiniMg. The performance features and arpeggiator
add a whole new twist to this already classic synth. I am completely blown away that I now have this on my iPad.”
- Richard Devine, 2013 (electronic musician and sound designer)

GRENOBLE, FRANCE: music software and hardware company Arturia is proud to announce availability of iMini V1.2, an innovative iOS 7-supporting update to its authentic recreation of the 1971-vintage MiniMg™ * monosynth for Apple’s allconquering iPad, as of September 26…

Like time and tide, technology waits for no man (or woman). Within days of Apple advancing its iOS — the mobile operating system at the heart of its iPhone, iPad, and iPod touch devices — to iOS 7, with all-new features like smarter multitasking as well as enhanced apps to make everything easier to get to and use, Arturia advances its iMini app to take advantage of iOS 7’s inbuilt Inter-App Audio, allowing users to send MIDI commands and stream audio between apps on the same device. Thanks to its new iOS 7-supporting INTERAPP AUDIO TRANSPORT feature, iMini V1.2 can connect and control other similarly-supportive apps with the greatest of ease, letting users concentrate on what they do best — making music with the ultimate classic analogue synth emulation for iOS whenever and wherever the mood takes them!

Existing iMini owners of course can directly download the V1.2 update for free, which is sure to put them in a good mood to start with, but even with all this developmental discourse of iOS 7 support it’s still nice to know that Arturia will continue to make a donation to The Bob Moog Foundation for every iMini sold in recognition of the innovative instrument to which it owes its very existence. In turn, this supports the dream of building the Mgseum™ (Bob Moog Museum), the convergence of The Bob Moog Foundation’s goals of inspiring and educating people through electronic music.

Today, then, there’s really no excuse for not taking that history-making MiniMg™ sound anywhere anytime with iMini — all the more so with all that improved interactivity, thanks to the inspired iMini V1.2 update. So what are you waiting for? Head on over to Apple’s App Store and treat yourself to the new and improved ultimate classic analogue synth emulation for iOS! Inspiring electronic music awaits appropriate iPad owners everywhere.

* The MiniMg™ name used here is a trademark of the respective owners, who are in no way associated or affiliated with Arturia. These trademarks are used solely to identify the products whose sound and features were modelled during the development process.