Hideya Kojima is a popular Japanese artist and producer whose music foundations are deeply rooted in funk and disco music. He has produced songs for many artists and is highly respected both by his fans and the producer community. Together with female vocalist “Pon” they form the band “ORESAMA” in which they pursue a new and original J-POP sound with a disco / funk vibe.

Please let us know about your music background

Since I was little I have been constantly listening to the biggest J-pop top chart hits. When I first got around to use a DAW it was mostly overdubbing recording guitar and vocal parts on top of each other. I then discovered MIDI and digital plugins and started doing full arrangements by myself. It was then when I discovered “Get lucky” by Daft Punk and Nile Rodgers and it left a really strong impression on me. On a quest to discover how to re-create that kind of sound, I found that disco music was the answer I was asking for. That’s how I started incorporating elements of that genre into my music.

Let us know what plugins you normally use

I have been using ARTURIA’s V COLLECTION vintage synth sounds for a long time, pretty much all the time. As for bass, strings and other acoustic instruments I usually use NI’s KONTAKT libraries. As for drums I usually use samples.

Let us know about your song creation process

I don’t use any given song for reference. What I do before touching any instrument or start the composing process is to create a picture of the song I want to make inside my head. I create the rhythm and riffs in my head and once I have a clear vision of it, I will then go to my gear and make it a reality. Depending on my mood and how I feel that day the results can vary a lot. Once I get the gist of the song done I will then try to follow up on that same vibe and continue with the arrangement process.

From a guitarist perspective, how do you choose synth sounds?

When I first discovered the disco genre I listened to many songs and I kept on founding sounds I couldn’t quite identify, I later discovered that these were vintage analogue synth sounds. So normally I will use those sounds as a reference to select and edit my own based on those 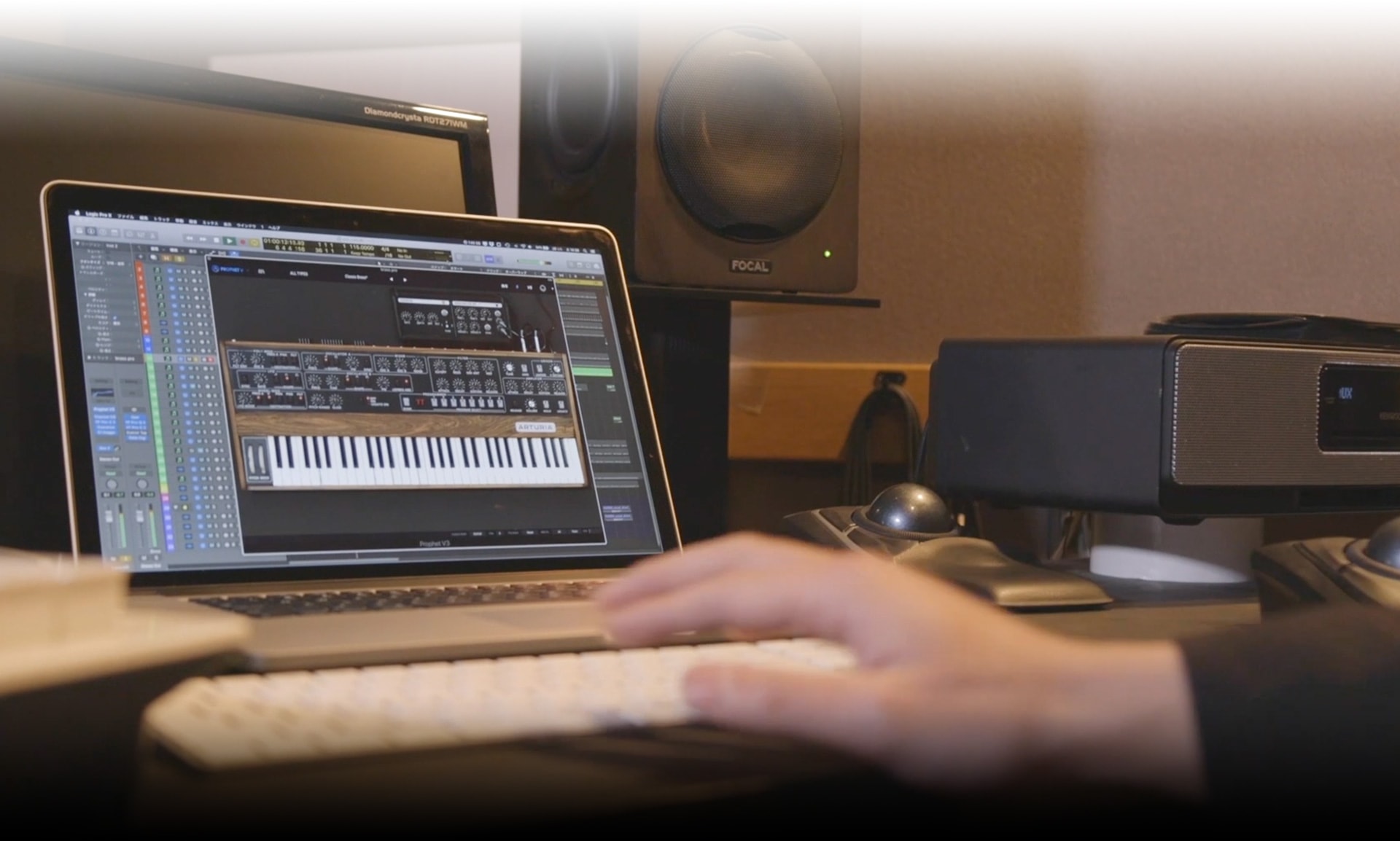 How and when did you start using ARTURIA V Collection?

One of the things I discovered while I was making music was that I really liked the MOOG sounds. I wanted to buy a MOOG but it was really expensive and I couldn’t afford one so I looked for other options that would be less expensive and as close in sound as the original. It was still version 3 back then. I was very surprised by its incredibly good sound and I have been using it non-stop since then!

How do you use software plugins?

Well, as I said I use ARTURIA’s Mini V especially for bass, alone or combined with other bass sounds. For example I would add on top a slap-style electric bass line with strong attack. The two bass sounds would mix and will create a very peculiar sound. When you listen to it on its own the slap-bass will stand out but when listening to the full mix, the synth bass line stands out more, it’s a really interesting phenomenon!

I really like ARTURIA’s Prophet V sound for Brass parts. What I particularly like about ARTURIA’s V collection is that the plugins include really easy to use Chorus and Delay effects. You can use sounds with effects as sound sources and that really comes in handy. I use chorus effects quite a lot, it gives a nice stereo feel to the sounds. With just that you can create really rich sounds without having to layer many sounds.

Do you also create sounds from scratch?

Of course I do, but the instruments in the V Collection include many really good presets so most of the time I would just choose a preset that is kinda close to the sound I am looking for and work my way from there adjusting the envelope, filter etc. Mini V and Prophet V’s presets are specially good! 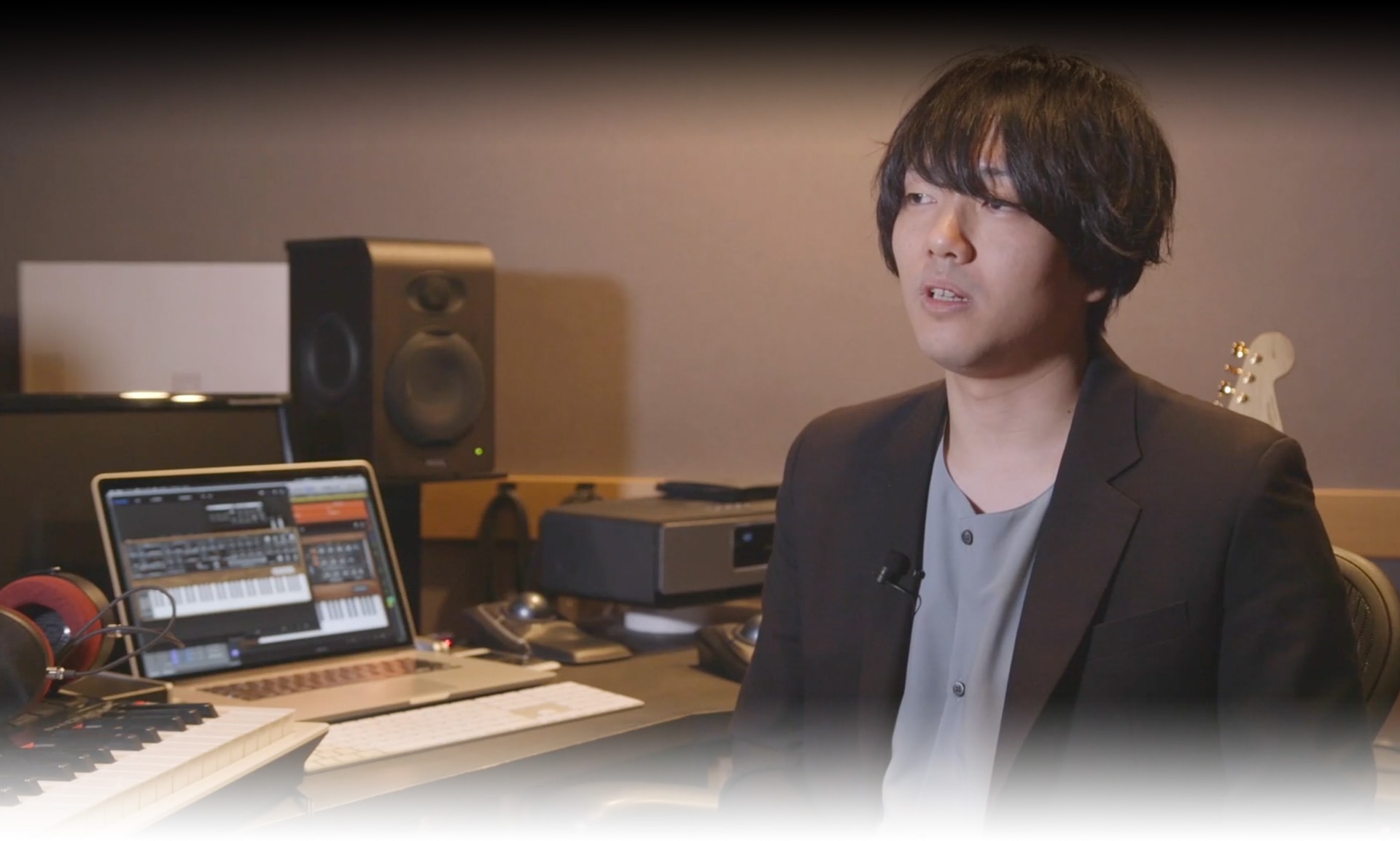 What I like about it is that it can be used for many different styles of music and has a wide variety of synth sounds! Not only are these sounds “good”, they have personality and a lot of character and sit really well in the mix. What happens a lot with software synthesizer plugins is that sounds will either stand out too much or not stand out at all and thus you have to further fix the sound using other plugins. But that’s not the case with ARTURIA V collection, the sounds are fantastic and work really well when used together too.

What are your plans with your band “ORESAMA” in the close future?

On April 24th ORESAMA released the single “OPEN THE WORLDS” that is the opening song for the second season of the anime “Hangyakusei Million Arthur”, please check it out! It features less synths and way more piano than other songs but ARTURIA’s sounds are present all over the track giving it a nice analog feel. ORESAMA will keep on that quest for disco sounds with our own original and unique melodies, rhythm and groove!

For more information about HIDEYA KOJIMA and ORESAMA: