Bring Me The Horizon

On their journey to literally becoming one of the world’s biggest rock acts, Bring Me The Horizon have danced with deathcore, djent, nu-metal, and alt-rock, emerging as an unstoppable musical force that transcends genre. As the person in charge of keyboards and programming, Jordan Fish & his hybrid rig is a crucial factor in their momentum. We caught up with Jordan backstage at the O2 Arena in London to talk about how he combines live drums, BeatStep, and KeyLab MkII in the name of raising hell.

Blessed with a curse

It’s the last day of their multi-award nominated Post Human arena tour, the electricity is palpable, and we’re talking keys. We’re backstage with Jordan, whose setup has been honed to performance perfection in a trial-by-fire process; over the last decade, the band’s tour schedule and stage show has evolved exponentially, presenting new challenges.

As demonstrated by the Post Human tour, the scale of their performances now demands seamless reliability and total expressivity. Jordan invited us to check out his current rig, a mixture of live drums, a BeatStep, and a pair of KeyLab MkIIs. He makes a note of admiring the build quality and practicality of the gear - a blessing for a high-profile touring artist.

It packs down nicely and it’s really stable, I can add stuff and move stuff quite easily… they’re robust, but they’re also quite lightweight. And the knobs don’t fall off, which sounds silly, but they always fall off! 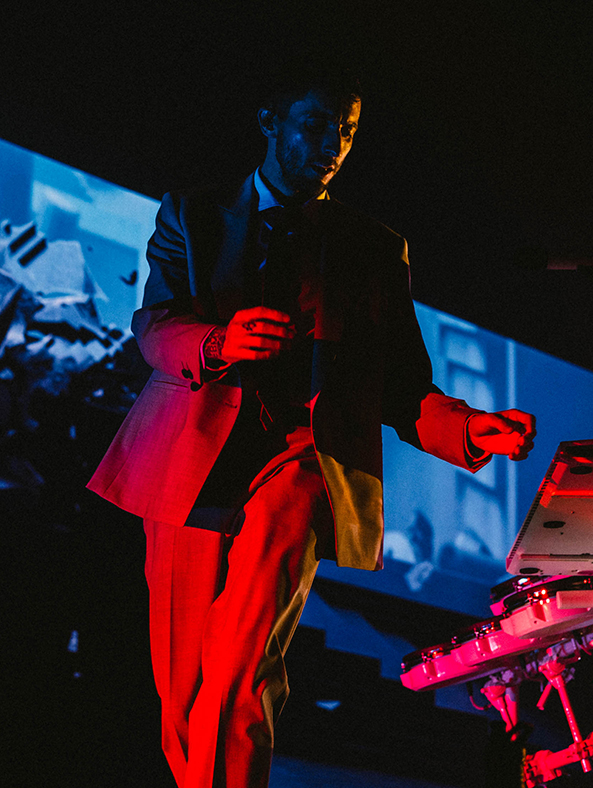 From studio to stage-ready

Studios and live setups are two different worlds. When it comes down to translating the produced music onto the stage, the band takes a song and analyzes its parts to find the best way of chopping it up and making it performance-ready.

The different layers of a track might be more percussive, or they may provide melodic content woven into BMTH’s wall of guitars. Jordan shares that the whole band use MainStage to synchronize their sound live; his tight-knit combination of KeyLab MkII and BeatStep puts it all at his fingertips with absolute flexibility.

When we’re in the studio, I don’t tend to think too much about how the music is going to be played. I’m just trying to make something good… Because it’s all a MIDI-based system, we can literally shift sounds around.

The process of translation from studio to stage often involves recreating sounds made for recording sessions. Jordan notes that this isn’t always possible, but by tapping into the original stems and assigning sounds to BeatStep’s pads, he can effectively have the exact studio sounds at the touch of a button.

For sounds that I’ve made and I can’t remember how I made them, I’ll re-chop them back up in some format, and then break them up into pads or on the Beatstep.

Get expert sound tips, exclusive offers, and endless inspiration straight to your inbox. Built for everyone - from the aspiring producer to the studio veteran - let’s take your sound to the next level. 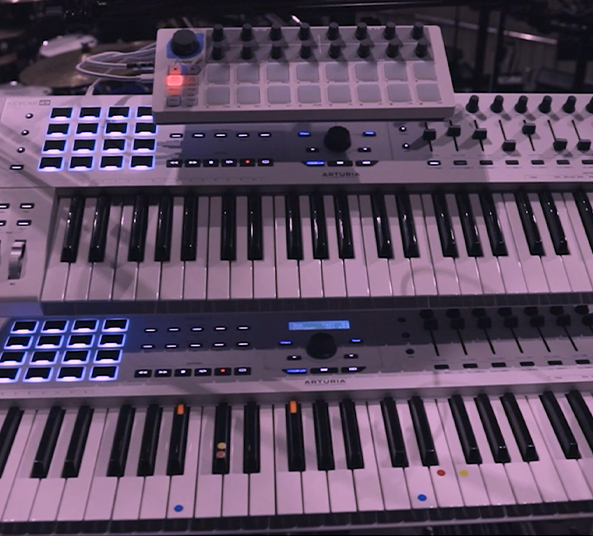 A touch of color

Jordan’s hybrid rig has been assembled not only to play the part, but to look the part too. Its neat white aesthetic (a stormtrooper vibe, as he puts it) looks space-age on stage, a mothership in command of a deadly musical fleet. He notes that it’s hugely encouraging to be welcomed on the stage not only by devoted fans, but by your own gear. This is equipment that’s not only designed to serve your specific creative needs - this is equipment that’s happy to see you.

When I come on stage, the keyboard does a little cool swipe thing on the lights, a little disco mode thing, which I love.

Jordan’s colorful stickers on the KeyLab MkII’s keys are no source of shame. He says he’s got them ‘partly because I’m awful’, but partly because he often needs to move on from playing on the drums to playing a chord on the keys. Because this swift move happens in the dark, it gives him ‘a little starting point to find where I am.’

Any serious musician wants a tool that’s open to do what your creativity desires. Equipment that’s professional without being patronizing, reliable while being inspiring. He makes it clear that he doesn’t feel held back by his playing skills:

I’m a good musician in some senses, but I’m not particularly a good player. I don’t think you necessarily need to be held back by your piano or keys ability, you know what I mean? I think your creativity is the most important thing.

As his parting message, Jordan leaves us with some wisdom that emphasizes the importance of enjoying what you do. He may not be a player in the traditional sense, but it’s clear that Jordan’s setup enables him and his bandmates to love what they do. When you see them on stage in their element, that much is obvious.

Mess with software synths, experiment, and just enjoy what you’re making. As long as you can make some music that you think is cool, and people connect with it, then that is way more important to me. 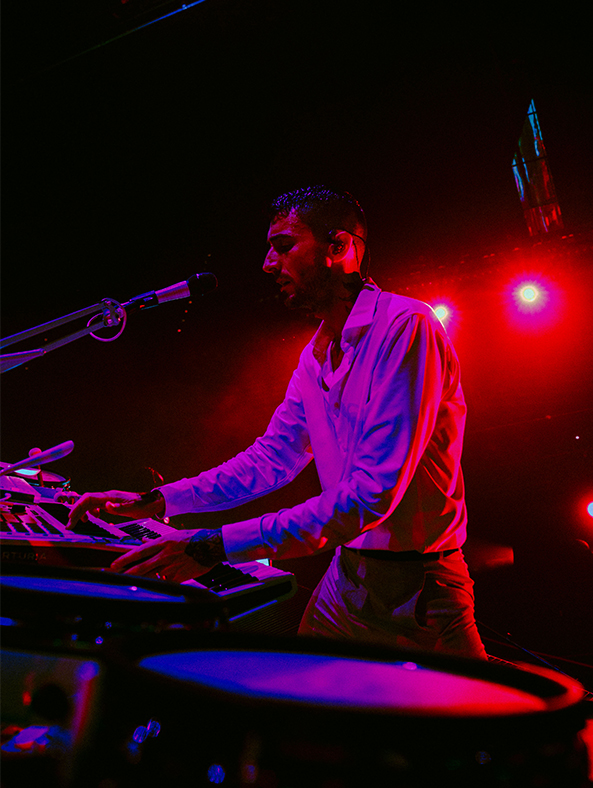 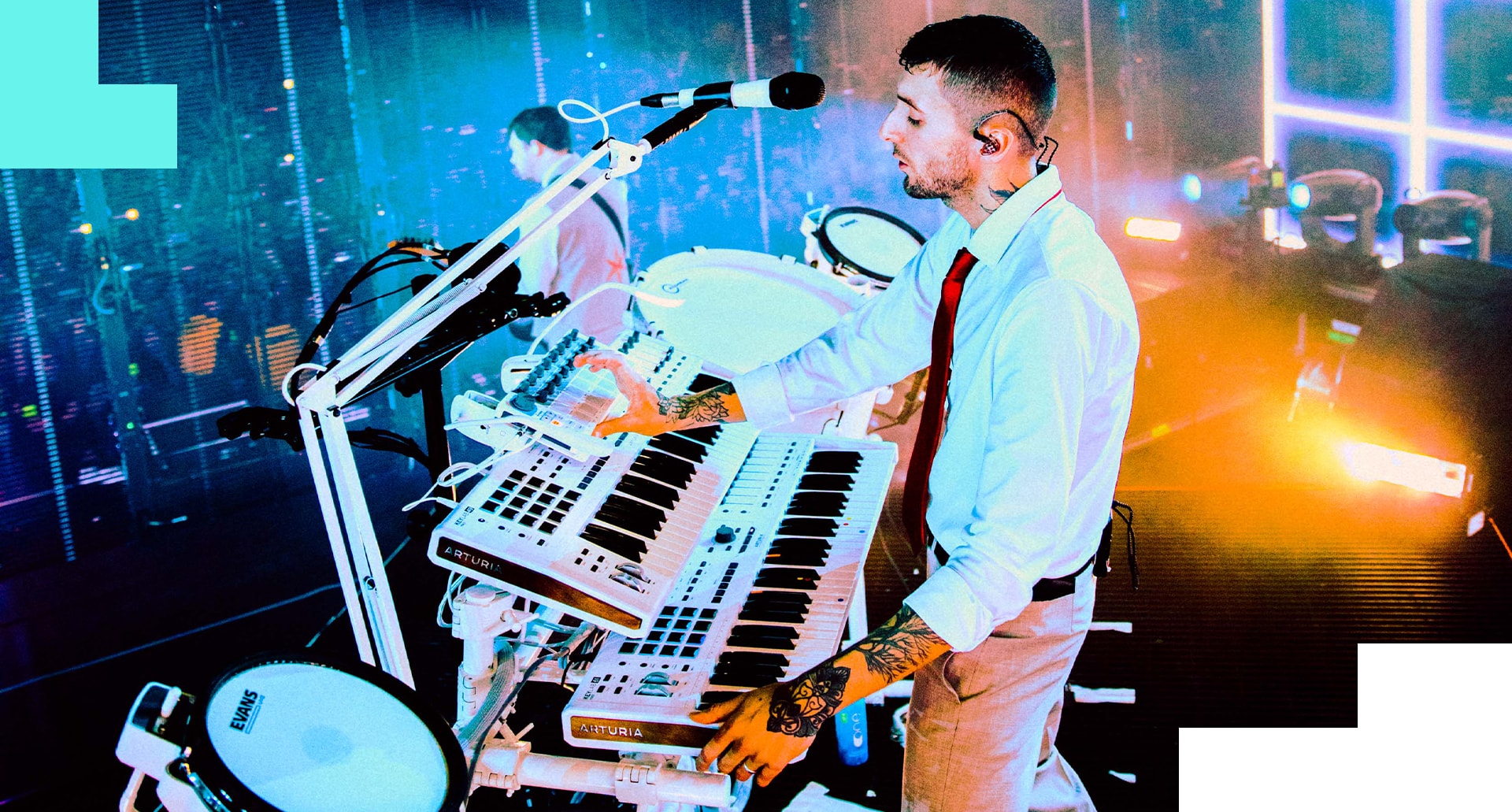 The tactile feel of a keyboard can make or break a tune, especially with the earth-shattering, soul-stirring intensity of BMTH’s sound. KeyLab MkII doesn’t demand pianist hands to reach full expressive potential, but rather strikes an accessible balance.

The feel is nice, it’s kind of like a middle ground between a synth-y feel, and it’s still got a little bit of weight to it. It’s the perfect keyboard for touring, very versatile. We haven’t had any issues with them, and I really enjoyed playing them. And they look sick. So, you win on all counts.

Sat atop his rig like a crown is the humble BeatStep, providing quick access to one-shots, sub-drops, and textural samples. Quick access is key when performing, so having BeatStep positioned almost at eye-level gives Jordan the immediacy he needs to communicate with both the band and the audience - and it keeps things playful.

This is really cool as well, I quite like to have just like a bank of buttons up there. I do a lot of one-shot button stuff. When I’m singing, rather than messing around on the side, I’ve got stuff in front of me I can faff around with.