The B-3 V delivers the most authentic tonewheel organ and rotary speaker experience you’ll find anywhere, plus customizations that open up new creative opportunities. 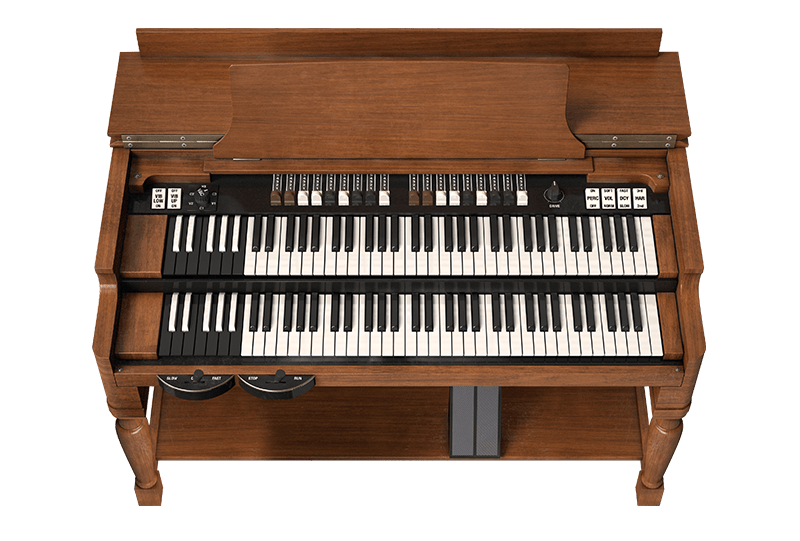 The famous organ that our B-3 V model is based on had a beautiful simplicity and elegance to its design and sound. With the help of some highly experienced sound designers, we not only bring you the true sound of the original, but also reimagine its possibilities, thanks to the brand new features found in our recreation.

There so many classic recordings that use the B-3.

Professional sound designer for Yamaha, Arturia, Korg, Roland, Sequential, Native Instruments, and many others for many years, going back to his first sound designer gig for Yamaha in 1991. I’ve been playing keyboards since I was eight years old, and learned synth programming on my very first synth which was a Minimoog I bought back in 1977. I’ve owned or played just about every hardware synthesizer or electric keyboard ever made, including Hammond organs, Rhodes and Wurlitzer electric pianos, Yamahas, Oberheim®s, Prophets, Rolands, Korgs. You name it, it’s been at my house at one time or another.
My other occupation has been keyboard technician/programmer for major artists, starting with Michael Jackson’s “This Is It” show in 2009 – Arturia generously provided an Origin and their latest software synths for that show’s rehearsals. And we used them! After Michael Jackson, I worked as keyboard tech/synth programmer for David Foster, Bonnie Raitt, the Cure, Sergio Mendes, Fleetwood Mac, and other artists. I am currently still with David Foster.
Aside from that, I still find time to write and produce a lot of original music, mostly in the country-rock vein these days. I am currently the co-writer/producer/keyboardist/musical director for Shannon Rae, an up and coming country-rock singer from southern California. To be honest, the first version of B-3 V had some issues, mostly with the rotary speaker effect. When Arturia sent me the beta version of B-3 V2, I was stunned at how much they had improved the sound, especially the rotary speaker effect. It was major! B-3 V2 really “felt” like a real Hammond organ. Aside from the rotary speaker (which everyone refers to as the “Leslie”), the two most difficult things to get right in a software Hammond organ are the percussion and the Vibrato/Chorus (V/C). Most virtual instrument designers get these wrong. But Arturia nailed them. Arturia also paid attention to the little details like drawbar foldback, which is what happens to the lower drawbars when you pull just one of them out and play up the keyboard. At a certain point, the drawbar “goes an octave lower” so it can keep sounding.
I also love B-3 V2’s “drive” knob – you can add just the right amount of overdrive that you want, anything from subtle dirt to full-blown rasp. Arturia understood that the drive comes from the organ’s own preamp – NOT the rotary speaker. They must have talked to a lot of old Hammond organ repairmen!
But maybe my favorite aspect of B-3 V2 is that it is entirely modeled, meaning you aren’t piling samples on top of one another when you pull out drawbars or play big chords. Sample-based virtual organs tend to distort because you are piling up samples on top of one another and it overloads the output of the instrument. This does not happen with B-3 V2.

Whenever I sit down at an organ, I want to be able to get my “favorite” classic rock organ sounds. Keith Emerson’s “Tarkus” sound, the raspy overdriven organ from Yes’ “Yours Is No Disgrace”, Procol Harum’s “Whiter Shade of Pale” sound, Sugarloaf’s “Green-Eyed Lady” super-percussive organ, Booker T.’s “Green Onions” organ, the screaming B3 from Spencer Davis’ Group’s “Gimme Some Lovin’”, etc. I know all the drawbar, percussion, vibrato/chorus and drive settings for these sounds, I’ve played these songs in a lot of bands.
So it was really really easy to get these sounds using B3-V2. I mean, I could set up the settings and registrations as I knew them and it sounded just like the organs on the records! Including how the low end sounded – Hammonds put out a lot of low end through the Leslie. I’ve met a lot of software organs that just sound thin and reedy – no beefy low end. With B3-V2 you almost have to be careful, especially with the pedal bass drawbars, because through a big sound system or super high quality studio monitors, the low end is almost threatening. As it should be.

My favorite is and always has been the “First Four Out w/Percussion” preset. Because that is my “go-to” sound for just about every gig. “When in doubt, use the first four out”, that’s my motto. It’s also the basic preset that every Hammond player turns to first, because you can cover a lot of songs using that preset. You can in fact do almost an entire night at the club with just that preset!

The preset works like a guitar power chord which is fundamental plus the fifth above, no major third. The 5 + 1⁄2’ drawbar is pulled out all the way, which gives you the “fifth” above the root fundamental which is formed by the 16’ drawbar. The 8’ and 4’ drawbars add even harmonics above that and like magic, you have your power chord sound. I then added the percussion, set to the 3rd, soft tab on, To give the extra punch and bite the sound needs. Thankfully, B-3 V2 allows you to customize your percussion volume settings, just like on a real Hammond organ. I personally like my “soft” percussion volume about a one fourth quieter than my “normal” percussion volume – I don’t like the “soft” percussion too quiet or it doesn’t cut through, and mostly I use the soft percussion setting because normal percussion volume needs to be reserved for times when I need the percussion to be insanely loud – like for Emerson Lake and Palmer music or songs like “Green Eyed Lady” and “Time of the Season” by the Zombies. I was able to do all of these adjustments on B-3 V2 without issues. It can turn even seemingly mundane things into incredible sounds.

Paolo Apollo Negri is a performer and recording artist, organ player for Italian acid jazz act Link Quartet, and a busy session player. A true vintage keyboard expert, he has played on over 300 albums, including 4 solo releases under his own name. One of the most experienced organ and classic keys players around, Negri has performed all over the world.

I really love the new version of the classic B3, the sound engine has been strongly improved and if you close your eyes now you feel like you're playing the real beast! The add of the pedalboard, the possibility to choose over different Hammond classic models and the new pedal rig really made this new instrument to shine.

I kept a simple guide line, the basic idea was to reproduce the sounds I used on the original instrument in the making of the latest Link Quartet albums, this is why, in the sound library, you will find some presets named over some of our best known songs. On the other side I have tried to experiment with the extra features of the B3-V2 creating some experimental sound which I hope will help to innovate and expand the classic Hammond organ palette.

The preset I like the most is "Psychedelic Sally". I made it from scratch the first day I had the V2 at my disposal. I wanted to investigate the new features and see if I could create something unique with the new version. The result is a very peculiar sound where the classic Hammond tone is still recognizable but, at the same time, is transformed in something new that just couldn't have been possible on the original one.