Your portable sequence launcher is about to get its most ambitious power-up! Based on the feedback from our community we broaden even further the possibilities offered by the BeatStep Pro.

What better way to preview the new BeatStep Pro firmware update 2.0 than to follow a performance by ultra-skilled artist Tom Demac? Electro wizard and early adopter of the BeatStep Pro, Tom takes control of his abundant studio.

Drum Sequencer: New polyrhythm Mode
Let them all progress at their own pace

The new polyrhythm feature for the drum sequencer of the BeatStep Pro now allows you to define different sequence lengths for each of its 16 tracks. A 9-step hit-hat fill aside a 7-step tom lick, a 11-step snare march laying over a straightforward four-on-the-flour kick, all mixing together? It’s up to you! Whether you want to create an elegant feeling of perpetual motion or the most radical drum anarchy, this is a whole horizon of creativity that opens in front of you.

To activate the polyrhythm mode:

Then select any track with one of the pads, hold the last step button and push a step button to define the length of the selected track. Repeat this for as many track as wanted and you’re ready to go!

Touch Strip: New Roller / Arpeggio Function
From now on, let say that you are on a roll!

BeatStep Pro has already become the go-to sequencer of the greatest live performers and with the new Roller / Arpeggio feature it is going to take your gigs to an even higher level. Holding the BeatStep Pro touch strip and pushing a pad will repeat the related sound at different resolutions. This feature is now available for each of the BeatStep Pro sequencers. On a drum sound, it will be extremely helpful to create rich fills in a flash. On a synthesizer or any other melodic instrument, it will be a key to create very instinctively fast bass lines or rhythmic leads. It goes even further as pushing several pads while holding the touch strip will create an arpeggio based on the related sounds. And of course, you can use it along with the real-time recording to create and rewrite sequence with a never seen effectiveness.

To switch between the usual Looper mode and the Roller / Arpeggio mode:

This setting is common for the three sequencers.
Then hold the BeatStep Pro touch strip and hold any pad(s). Moving your finger across the touch strip will change the resolution of the resultant roll.

Pattern Chaining: Saving Chains
Warning! This could lead to a chain reaction!

Spontaneity is profitable when it comes to experimenting and extracting composition ideas from scratch. However, when you are on stage, being able to put everything in working order is often preferable. With this idea in mind we deeply reworked the BeatStep Pro code so that you can save and recall in a flash specific configurations of your patterns and even pattern chains, what we call scenes.

Each of your 16 projects can contains up to 16 scenes each allowing to chain up to 16 patterns for each of the 3 sequencers. Now if you are more into music than mathematics, this can be summed up as tremendous advantages for live performances.

The Scene mode must be activated through the Arturia MIDI Control Center. Connect your BeatStep Pro to your computer, make sure to select it in the top-left product list, open the “Device Setting” tab and switch the scene mode to “On” in the “Global” section.
To create a pattern chain:

You can repeat this operation for the other sequencers to stack several pattern chains. This represent a “scene”.
To save a scene: To load a scene, go in [CONTROL MODE] and just push a step button to load the related scenes.

Octave randomization
As long as you don’t go off-road, you are free…

You like what a certain level of unpredictability can bring to your music but you prefer to keep the control over your creations? Then, you will probably love the octave randomization mode. If it is switched on, when using the Randomness feature, the pitches of your active steps will only be shifted up or down one or several octaves. This will give you the best of both unpredictability and musicality.

The Octave randomization can be activated independently for the two melodic sequencers thanks to the Arturia MIDI Control Center.

Then you are free to tweak the Randomness and Probability parameters for the current track or all the sequencers at a time. The ones for which the octave randomization is enabled will be affected accordingly.

Pad-based Step Edition
We won’t blame you to exceed the speed limit.

We have always wanted BeatStep Pro to be synonym of absolute performance so when we identified a way to help you creating your sequence even faster, it was sure that we would let you take advantage of this one. Instead of editing the steps of your sequences one-by-one using the knobs, you can now hold a pad to define the pitch and push the step buttons to say when this note will be played. It is very effective when a same note is repeated many times in a sequence.

Volca compatibility
Between the Volcas and BeatStep Pro… It’s a match!

Leaving pieces of gear out in the cold is a difficult experience for any musician. Thus, we brought several additions to BeatStep Pro in order to foster the integration of the Volca modules.
It begins with a new clock format to ensure a perfect synchronization of the BeatStep Pro with the Volca built in sequencers.
From now on, you will also be able to customize the MIDI channel for each track of the Drum sequencer independently from the others. This will allow you to make the most of the Volca Sample but also to build complex setups where the BeatStep Pro Drum sequencer will control several instruments at a time.

Both of these settings can be accessed through the Arturia MIDI Control Center.

Then choose for each of the tracks the MIDI channel you want to use.

Other improvements
How many desserts will you take?

In addition to these many new features the BeatStep Pro Update 2.0 comes with many other enhancements.

With the Update 2.0, the BeatStep Pro once again push back the limits of what you can get from a portable hardware sequencer. So much that you could find an interest of having a map summing up all the features accessible through key combinations and shortcuts. 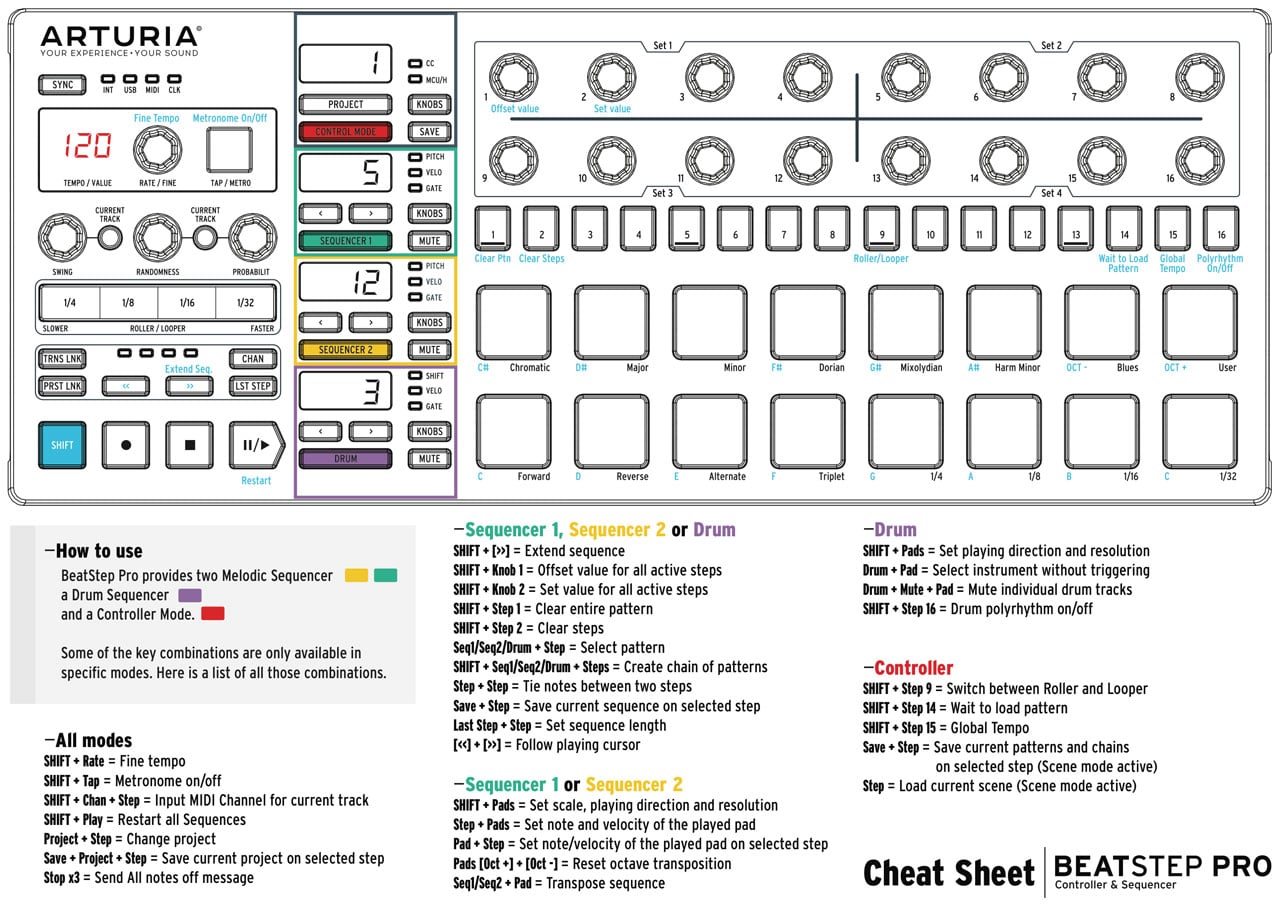 You can also download it in PDF format to print it for yourself here: Download Cheat Sheet

How to update my BeatStep Pro?

Updating your BeatStep Pro firmware requires your unit to be connected to a computer on which the latest version of the Arturia MIDI Control Center is installed.

If the MIDI Control Center is already installed on your computer it will automatically update if this one is connected to the internet.

At the end of this process a reboot will finalize the firmware update process.

We hope that you will enjoy even more your newly-updated BeatStep Pro!